Guys. I am a terrible blogger. It’s weird because I would say I enjoy writing and this seems like a thing I’d be good at, but here it is, weeks since my last post. Okay, my apologies. But let’s move on.

You may or may not know that for my birthday last year, my husband, the Captain, got me a real Dutch oven. Not one of those fancy Le Creuset ordeals that costs a fortune, but one for cooking out of doors. And we have done a decent amount of experimenting with it since it arrived, including making some fantastic rolls for Thanksgiving last year. 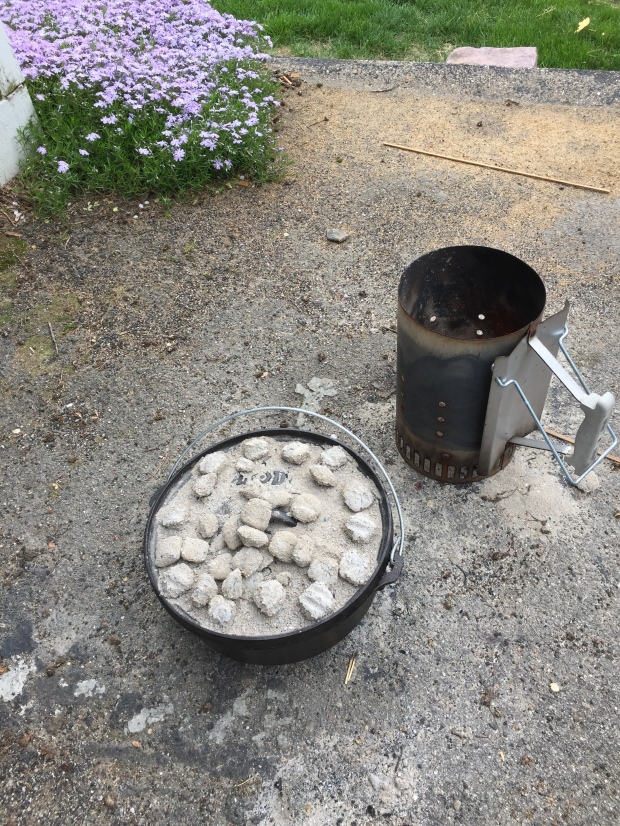 Tonight it joined forces with Auto Food to provide us with a Dutch Oven soup and rolls. Auto Food is a spreadsheet that my aforementioned husband created by listing all our favorite proteins, carbs, and vegetables, weighting them by frequency, and then having the spreadsheet spit out a meal plan. More about that in a different post.

For this meal, all that Auto Food said was chicken and leeks in the Dutch oven and rolls. After that, I filled in the details. I checked my calendar to schedule this meal for a day with food weather. Because Dutch oven rolls are fantastic and not to be passed up, I planned to bake the rolls first and then remove them to make the soup.

Rolls are easy. I combined 1.5 cups warm water with a tablespoon of brown sugar and a tablespoon of yeast, 1 teaspoon of salt, 3 cups bread flour and 1 cup of whole wheat flour. The Bosch kitchen machine did all the hard work. Once the dough was silky and glutinous, it rose for an hour in an oiled bowl. I punched it down and shaped this incredibly elastic (it was pure joy to work with) dough into 16 rolls and plopped them into my oiled Dutch oven for another thirty minute rise. I then placed the oven on the coals. On went the lid with more coals, and it baked for 15 minutes. With rolls it’s important to only use a few coals under the oven or they scorch. Learn from my past mistakes. After fifteen minutes you get this golden beauty.

While the rolls rose and then baked, I prepped soup ingredients For extra ingredients, I essentially started clearing out my crisper drawer. The results were:

After removing the rolls from the pot, I added two tablespoons of butter, the carrots, onion and leeks, and sautéed them for five or so minutes, adding cubes of chicken after the first two minutes. Oh, and because I used so few coals under the pot for the rolls, it was necessary to add more for this part. 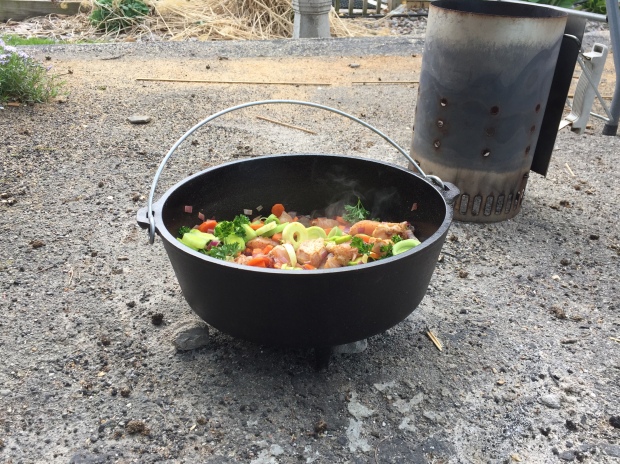 Once everything was looking and smelling really nice, I added the water/bouillon and mushrooms, and popped on the lid for twenty minutes. The sauce developed a dark color and a multidimensional flavor from the vegetables. The Captain said he was really excited for this meal and that’s a big deal. This is a man who firmly believes, “Soup is not a meal.” 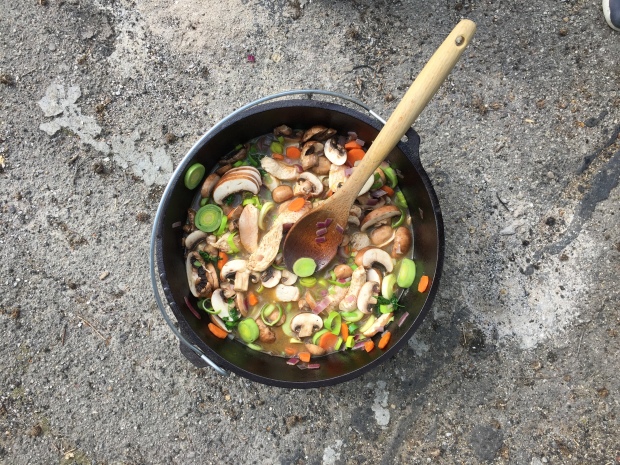 The kids? Well since this is about how I feed them… constantly… every day… I suppose they deserve a mention. Fitz has a fever and ate about half a roll before begging to go to bed. This was allowed and my poor boy promptly fell asleep. The Bean ate the chicken and rolls with great enthusiasm, the carrots with less, and then began to throw the mushrooms and leeks at the table because he was totally uninterested. The Captain, however, said the meal was delicious. The leeks are the highlight though. They are in the onion family but they have a bright, summery flavor that a bulb onion doesn’t have. Will I make this again? Well… that depends on what Auto Food tells me!

View all posts by sjmonnier